Often dubbed one of the greatest of the world’s small cities, Amsterdam is not a particularly monstrous city. Indeed, with a footprint of just a little over three square miles, the city center could quite easily be covered in a day on foot alone. And yet, the city is often recognized for having some of the best transport infrastructure in Europe.

From the emblematic canals delightfully splitting up the Dutch capital’s neighborhoods to its famous tram system covering just about all of the city, there’s a capable range of options for getting around Amsterdam to help you explore the city on your own terms. 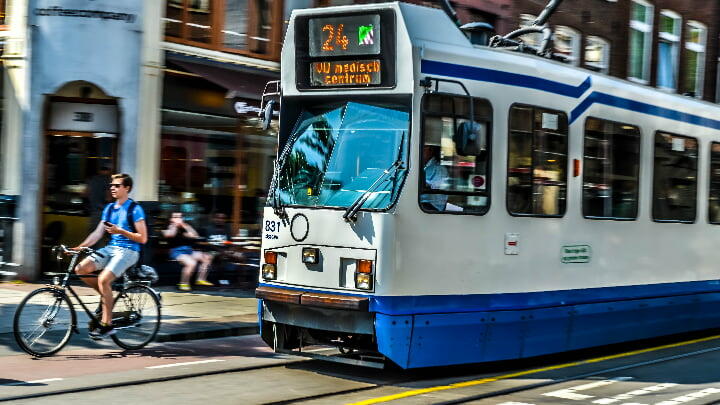 Amsterdam boasts an extensive network of buses servicing both the city center and the surrounding neighborhoods. Operated by three companies – GVB, Connexxion and EBS – Amsterdam’s buses offer a reliable means of getting across the city fast, with many routes servicing stops close to key social hubs and attractions.

The city also operates twelve night bus routes to help you get around while exploring the city’s famous nightlife scene. Each of these routes helps to connect the city center with the surrounding suburbs, and buses typically depart every 30 minutes between midnight and 7AM.

Second only to bicycles, trams are perhaps the most recognizable mode of transport in Amsterdam. Connecting Amsterdam Central Station to the city’s many key areas and further neighborhoods, Lines 1, 2, 5, 9, 13 and 17 are typically your best bet for getting around the city. Depending on the day and time, the frequency of trams will vary, typically arriving every 5 – 10 minutes.

The Amsterdam Metro system offers an alternative means of traversing the central spine of the city and accessing the outer suburbs. Operating across five lines and servicing a total of 39 stops, the Metro offers the fastest and most efficient means of crossing through the city, passing through all major business and office districts alongside many train stations.

The three modes of public transport that make up the transport infrastructure of Amsterdam all operate on roughly the same schedule and ticketing service. The majority of services begin operations at 6AM and will typically continue until 12:30AM the following morning.

Tickets and passes are wholly dependent on how long you intend to stay in Amsterdam and how often you plan to use public transport. For casual use, single and return tickets are available on all services on demand. You can also purchase passes which allow for unlimited travel for periods of 24, 48, 72 and 96 hours, offering slightly discounted rates as long as you get plenty of use from them.

If you plan on staying in the Netherlands for more than three days, then your best bet would be to purchase and top-up an OV-chipkaart from any major transport hub. This pass is heavily used by locals and can simply be scanned whenever you hop on your transport of choice. 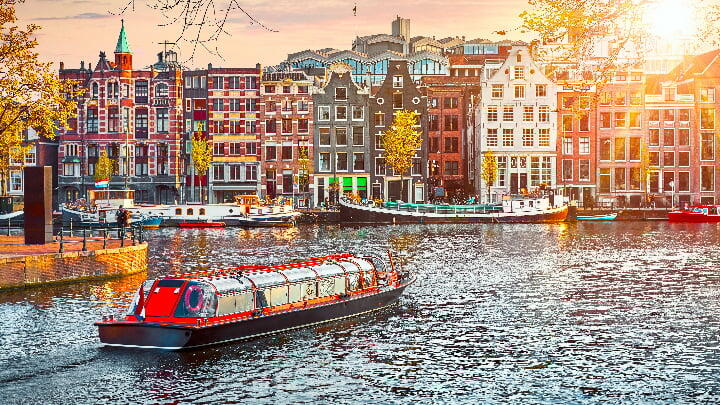 Amsterdam’s canals are more than just an iconic photo op. Originally serving as means of water management, defense and facilitating trade, the labyrinth of canals accounts for 25% of the city’s surface area. Most of the traffic on the canals now consists of pleasure sailing, both private and commercial.

If you’re looking for a unique means of getting around the city, there’s a plethora of boat tours available at your convenience to get you from A to B with a little local insight thrown into the mix. Alternatively, it’s also fairly simple to rent a boat for yourself, whether it be a manual pedal-boat, a small capacity electric boat or a full-sized barge for you and your friends. 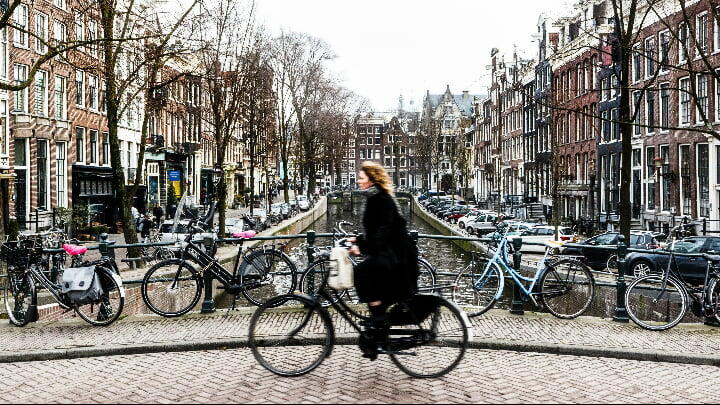 You may have heard it said that Amsterdam is home to more bicycles than people, and that’s no simple exaggeration. With roughly 1.1 bikes to each resident, it’s plain to see that the locals readily uphold the age-old image of the Dutch cycling nation.

With over half of Amsterdam’s 800,000 residents relying on their bicycles as their daily mode of transport, it should come as no surprise that the city caters heavily to their preferences. In fact, with over 470 miles of cycle lanes making up the Amsterdam Bicycle Network, cycling can often be the easiest means of getting around.

To capitalize on this trend, there is now a huge selection of bike rental stores dotted throughout the city. You should expect to pay somewhere in the range of €10/day for rentals. If you intend to stay in the Netherlands for more than a month, then purchasing a second-hand bike is a much more cost-effective option, with many going for between €50 and €200. Avoid buying bicycles on the street from unverified vendors, as these are likely to have been stolen and can land you in a lot of trouble.

Be sure to exercise some basic cycling safety and etiquette if you choose to ride in Amsterdam. 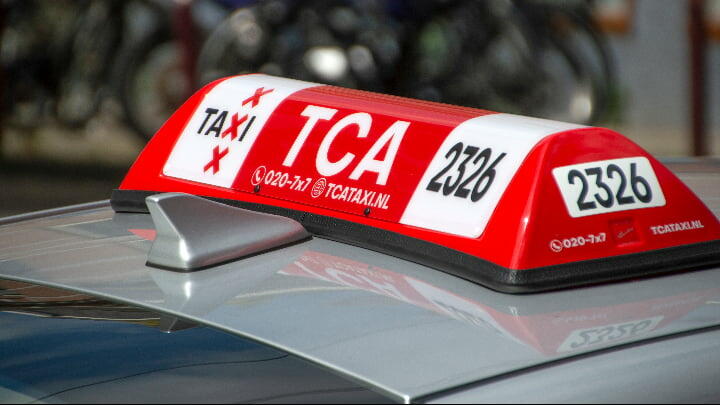 While road traffic is fairly minimal in Amsterdam, that can be quite the boon for those who need to get themselves across the city fast. Whether you’re looking for airport transfers or need to make it to an event quickly, taxis can be your best friend. Most taxis are regulated by the municipality to charge pre-set rates, so you should never have to face a surprise fee for your journey.

Like in most cities, you'll find taxi ranks at the airport and most major transport hubs. Taxis can also be ordered at your convenience by calling up your chosen taxi firm, or you can make a booking via the TCA app. Alternatively, the likes of Uber and Bolt also operate in Amsterdam.