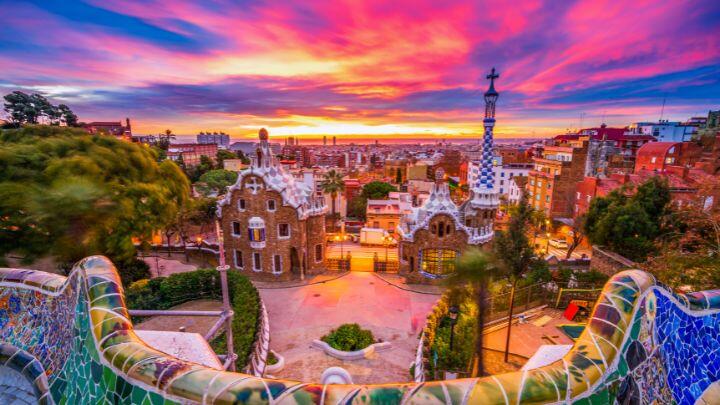 It’s always good to see life from a different perspective… and here’s how you can do just that with this list of the 10 best viewpoints in Barcelona.

At street level it’s sometimes hard to get your bearings in a new city. From above, however, you can see where you’ve been and make sense of one place in relation to another. And you can be sure of some great photo opps too, with amazing Gaudi architecture, free-flowing sunshine and buzzy atmosphere all laid out before you in the Catalan capital.

From mountain tops to rooftops, spires, statues and terraces, here’s our top tips for Barcelona sight-seeing that will have you feeling…on top of the world! 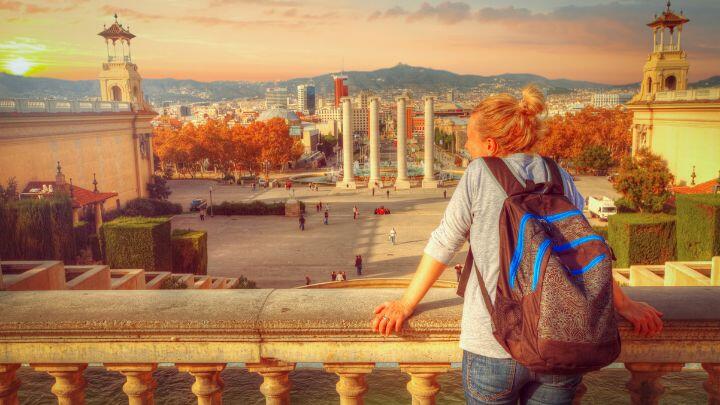 From the Plaça d’Espana look beyond the Venetian towers to admire the beautiful dome and bell-towers of The Palau Nacional de Montjüic. Originally built for the 1929 World Fair it now houses the Museu Nacional d’Art de Catalunya, home to more than 260,000 historic (and contemporary) works. But perhaps not everyone realises that there’s as much to see from it as in it! The two rooftop viewpoints of the Palau Nacional offer 360º panoramic views of Barcelona. Marvel at the famous Magic Fountains, spot the soaring Sagrada Familia and look out for the buildings that were part of the 1992 Olympic Park. The terrace even has a cocktail bar to make the view even more delicious! 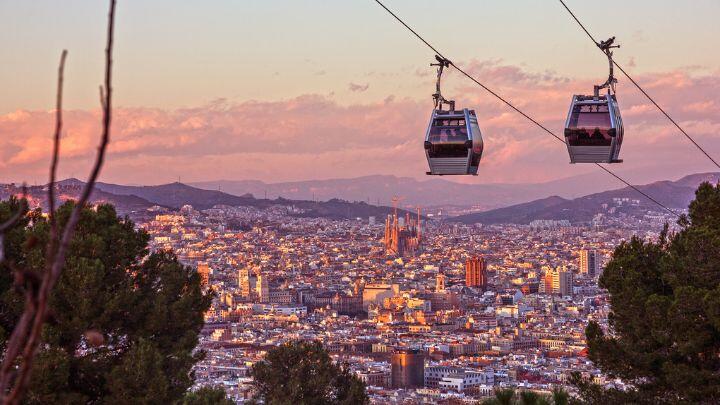 Not high enough for you…? There’s plenty to do and even more to see when you head uphill from the Palau. Take the Funicular de Montjüic to the base station for the cable car - Telefèric de Montjuic, then glide over the tree tops as you look out over the city, the port and the sparkling Mediterranean.
The next cable car stop is at Mirador d’Alcalde, a ‘belvedere’, or series of terraces, that provide an even more impressive view and a chance to explore the beautiful public gardens.
You may as well go all the way! Montjüic Castle tops the hill; a former fortress and prison, it is now a Military Museum. The best birds-eye view is from the terrace of the Terraz Martinez where you can also enjoy a drink, along with seafood platters and paella said to be among the best in town. 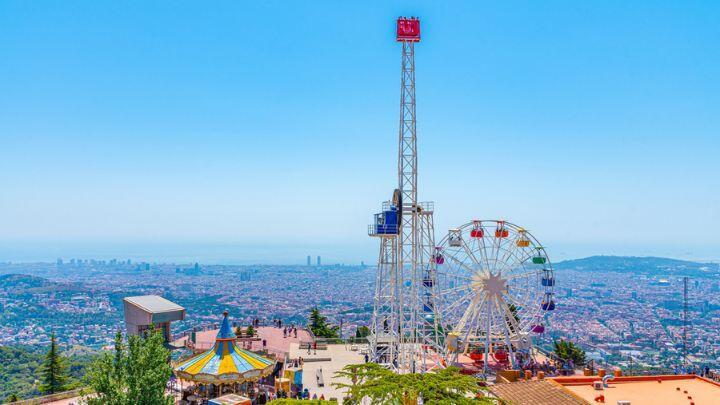 Just when you think you’ve reached new heights, we have to break the news that Montjüic is only the second-highest mountain in Barcelona. Just a hill in fact alongside Tibidabo, which, at 512m above sea level, is visible from practically anywhere in the city.
The Hop-On Hop-Off bus turistico blue route heads up there, or jump aboard the Tramvia Blau, the charming vintage tram that takes you to the start of the Tibidabo Funicular. This has recently been re-invented as the Cuca de Llum (Glow-worm) with new larger windows for maximum oohing and aahing, educational on-board displays and funky new lights that are most effective after dark.

When you land you could take a scenic stroll in the Parc de Colliserola or pause for a panoramic picnic by the church of the Sagrat Cor (Sacred Heart). Tibidabo’s best known attraction however, is probably its amusement park, one of the oldest in the world.
The ‘Panoramic Area’ boasts the best views of Barcelona as well as two especially iconic attractions. The famous Avió Plane, the world’s first ever flight simulator, is a replica of the first aircraft to fly from Barcelona to Madrid. Powered by its own propellor since 1928 it gives you all the views, with a side helping of alarm! Meanwhile the Talaia lookout tower, which takes visitors up to a giddying 551m above sea level, was such a hit when it opened in 1921 that people believed it had healing properties and that if children with whooping cough spent a few minutes at the top they’d be cured. Best give it a try!

We all love a hidden gem and, away from the crowds, this is a cute and quirky place to get your cityscape kicks. Whilst it’s becoming increasingly popular, particularly at sunset, it’s still one of the quietest spots to find the most beautiful view of Barcelona.
Despite the name, the Bunkers del Carmel, or El Turo de la Rovira (for the hill on which they’re found), were never actually bunkers but, in fact, anti-aircraft fortifications dating back to the Spanish Civil War. Canons were sited on the concrete bases and defenders could survey the entire city. When parts of the city were spruced up for the 1992 Olympics, this historic site got an overhaul, so now you can enjoy the same jaw-dropping vista.
Pick the perfect time of day to survey how the Sagrada Familia bestrides the city and gaze beyond Barceloneta beach to the sea. Whether you reach the area by metro, bus or taxi, you’ll still need to be prepared to walk some distance uphill but put on your comfiest trainers, pack a drink or two to share at the top and we promise it’ll be well worth it. 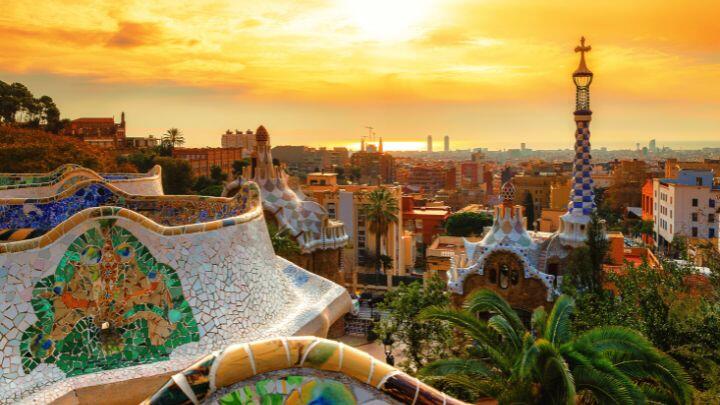 How have we got this far into an article about Barcelona and not mentioned Antoni Gaudi? Well hold tight since, as we all know, there are endless captivating examples of his design and architectural genius around the city.
Parc Guell is quite literally one of Barcelona’s high-spots. Spread over a once bare hill (it was formerly called Muntanya Pelada (the Bare Mountain) Gaudi transformed it into a lush, flowing park, featuring some of his best work, including the Dragon stairs and the Austrian Gardens. Bag the mandatory selfie with El Drac, the famous Gaudi lizard, then, from the terrace of the ‘Monumental zone’, you can drink in the whole of Barcelona spread below, framed by colourful benches and modernist mosaics, with the Mediterranean sea beyond. 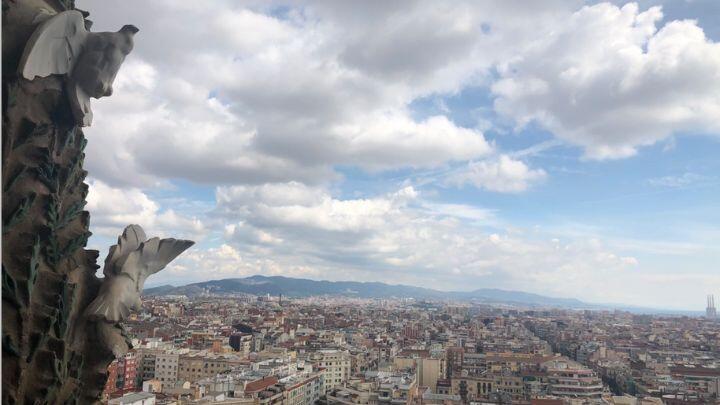 Gaudi’s unfinished masterpiece is Barcelona’s most famous icon. Thousands of visitors each day marvel at the endlessly imaginative detail of its facades or stare open-mouthed at the awe-inspiring architecture and dazzling stained glass of the interior. Soak up its secrets on a Sagrada Familia guided tour, then, if you’re here for the views, grab a ticket that takes you to the top of the basilica’s lofty towers.
Gaudi’s original vision was for 18 towers, to represent the 12 apostles, the four evangelists, the Virgin Mary and Jesus Christ. Only eight have been finished so far. Should they finally be completed as intended (with that dedicated to Jesus Christ envisaged at 560ft) they will make Sagrada Familia the tallest church building in the world.
The richly decorated Nativity tower was the only tower to be built under the supervision of Antoni Gaudi himself so don't miss the chance to see his original work up close and to feel the breeze as you stand on the bridge that connects the towers of the Nativity facade. Facing the east, you can enjoy a stunning view of the city and the mountain ranges beyond.
The Passion Tower, representing the passion, death and resurrection of Christ, is much more minimal but the view to the west and the Mediterranean is just as incredible. 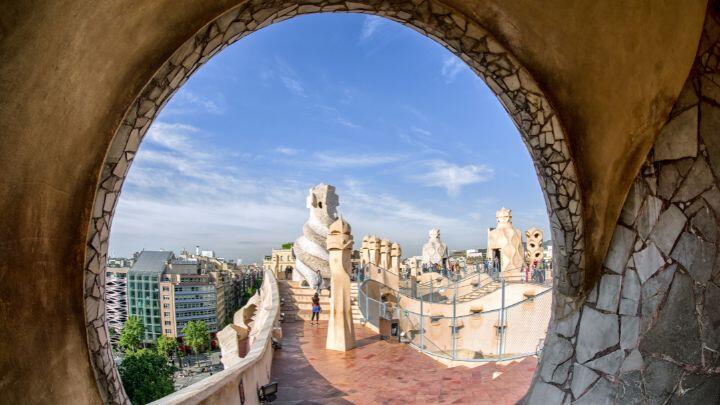 Not as high up but equally awe-inspiring are the houses Gaudi created on the Passeig de Gràcia.
From the rooftop terrace of Casa Battló, where ceramic tiles resemble a dragon’s back, you can look across the old quarter and over to the undulating facade of La Pedrera (sometimes known as Casa Milá). If you visit in summer you might even find special rooftop ‘magic nights’ where the city views are complemented by free drinks and live music!
Across the road, on the terrace atop La Pedrera’s huge stone wave, you’ll find twisted, sentinel chimneys, many with warrior helmets, plus spectacular 360º views over the Gracia district and city beyond. 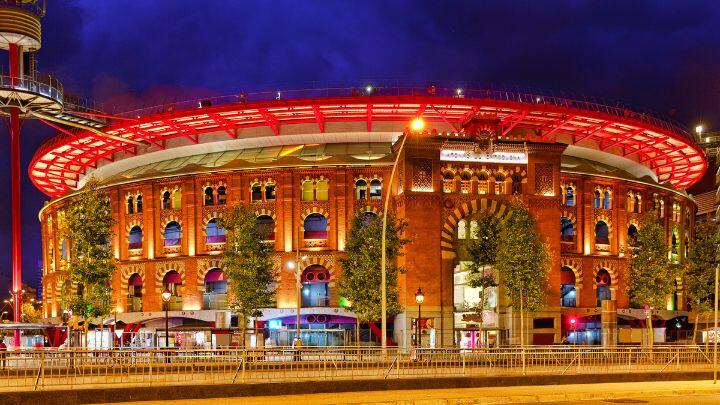 Another popular city centre viewing platform - with the rare added bonus of dining and drinking - is the roof terrace of this distinctive building on Plaça d’Espanya, once one of three bullfighting rings in the city, with capacity for around 15,000 spectators. It was later transformed into a shopping and entertainment centre by legendary British architect Richard Rogers. His ambitious design maintained the original facade but added a dome and circular roof terrace. Don’t bother with the separate glass elevator; the lifts inside the shopping centre are free and whisk you up to the rooftop viewing platform and an exciting choice of bars and restaurants. 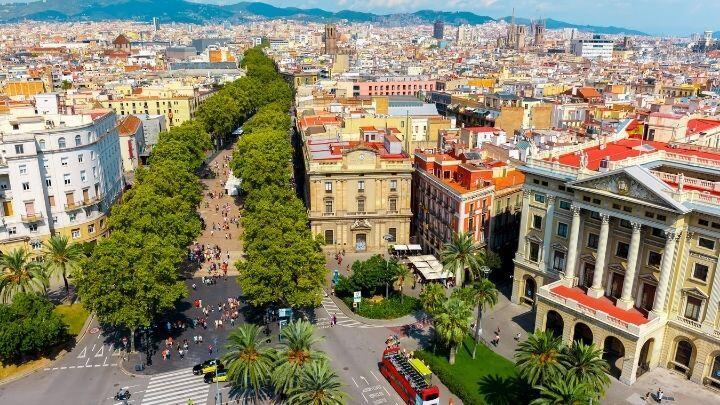 At the bottom of La Rambla, this 60m high Corinthian column, topped by a bronze statue, marks the spot where the famous explorer first set foot back into Catalonia after his trip to the New World. His arm is pointing south-east towards the sea; not, as many believe towards America, which is in the opposite direction! Hop aboard the lift concealed in the column and join Chris on his lofty pedestal. On windy days you can feel the column flex in the wind. A glassed-in viewpoint just by his feet offers views of the port, La Rambla, the Gothic Quarter, Montjüic and the sparkling Mediterranean so, like him, you can decide just where to explore next! 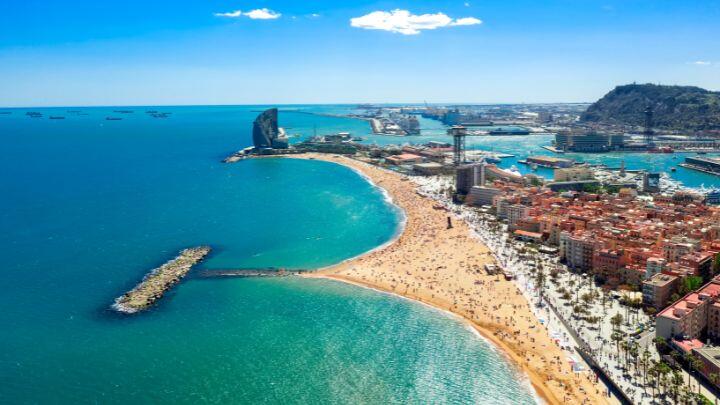 If you love living the high life, why not end your day at one of Barcelona’s many rooftop bars?
The stylish Sky Bar at Grand Hotel Central is open to non-residents after 8PM for food and cocktails and boasts an infinity pool that appears to cascade towards a view of the whole city. For a magical 360° panorama, treat yourself to Terrat at the Mandarin Oriental, which serves amazing Peruvian food, or take the lift to the 360° terrace at the Barcelo Raval Hotel for classic cocktails, tapas and live DJs on summer weekends.
Down at Barceloneta beach you can’t miss the W Barcelona Hotel (more locally known as the Hotel Vela (or Sail Hotel), the conical shaped building that turns blue and red at night. Ride the lift to the Eclipse Bar on the 26th floor to dance the night away, look out over Barceloneta beach and watch the city’s twinkling lights come to life.

We hope we’ve inspired you to new heights. For all the high spots and the low down on how to sightsee and save, remember to choose an All-Inclusive Pass or Explorer Pass - only from Go City.