Visitors to Boston can get an amazing tour both by land and by water with the Boston Duck Boat Tours – among the city’s most popular attractions for visitors and locals alike.

Visitors will learn the history and many fascinating tales of the most popular and historic sites in Boston, all while riding in a World War II-era replica duck boat.

Check out our helpful guide for taking a famous Boston Duck Tour, packed full of ways to save on admission, tips for visiting, other nearby attractions, and much more.

How to get Boston Duck Tour Discount Tickets?

We’ve got you covered – Boston Duck Tour admission is available with the below money saving options, so you can choose the attraction pass that’s right for you:

1. All-Inclusive Pass – All you can do. Includes admission to dozens of attractions. Available on 3, 5, and 7-Day Go Boston pass.

Tips for Taking a Duck Tour of Boston

While always an enjoyable experience, there are a few tips that will help you get the most out of your tour.

What is there to see and do on the Boston Duck Tour?

Tours are roughly 80 minutes long, with 20 of those minutes spent on the Charles River. Duck boats depart from and return to the Prudential Center, the Museum of Science, or the New England Aquarium. (For your convenience, tours taken through Go City Card now depart from all three locations!)

As the conDUCKtor regales guests with the history of the Old State House, Cheers, the Big Dig and more, the duck boat heads towards the Charles River and splashes down into it. While cruising on the normally placid waters of the river, guests get to see the Boston skyline, and that of Cambridge on the opposite bank as well.

Each Duck Boat is named in honor of a local landmark, and each conDUCKtor has their own persona and gimmick. You may find yourself, for example, on Faneuil Holly, the duck boat named for Faneuil Hall, otherwise known as the Cradle of Liberty.

You might also end up on North End Norma, named for the Italian neighborhood at the tip of the Shawmut peninsula. At the helm of the duck boat may be Captain WeirdBeard, the nephew of the famed pirate Blackbeard, or Worcester T. Filibuster, a lifelong politician who has yet to win an election.

What sights will I see on the Boston Duck Tour?

You will see dozens of famous Boston sights on your tour. They include the following:

What attractions are near the Boston Duck Tour?

There are plenty of other great attractions located nearby. Here are a few we suggest adding to your itinerary.

If you leave from the Prudential Center, check out the Skywalk Observatory on the 52nd floor for a bird’s eye view of the all the attractions you just saw at duck’s eye level.

If you’re hungry, check out the Top of the Hub restaurant for an unparalleled dining experience. They also offer tasty cocktails and apps if you want to avoid the commitment of a full dinner.

Getting In: Skywalk Observatory tickets are included with the Go Boston Card.

Tour goers leaving from the Museum of Science shouldn’t miss the 700 exhibits and numerous live demonstrations inside.

Kids will love the electricity show in the world’s largest open-air Van de Graaff generator is a sight to behold.

The Mugar Omni Theater, located at the museum, is the only domed IMAX theater in New England and only one of 60 worldwide that offers 180-degree domed viewing.

Don’t miss enchanting Hall of Human Life, where you can explore the biology and science behind how the human body functions.

Getting In: Museum of Science tickets are included with the Go Boston Card.

Another departure point option for duck boat passengers, the New England Aquarium is also a can’t-miss attraction in its own right.

It’s filled with an abundance of marine life from playful penguins to fearsome sharks and beyond. There’s even a touch tank exhibit that kids love.

Getting In: New England Aquarium tickets are included with the Go Boston Card.

If you’re already going to be at the Prudential Center to pick up your Duck Boat tour, then it’s worth your time to browse a few of the popular shops in this mall.

Explore the mall itself, and the streets around it. Who knows – maybe you’ll score an awesome deal!

Save on Tickets with a Go Boston Card

Remember, the Go Boston® Card is the best choice for maximum savings and flexibility, which includes Boston Duck Tours tickets, plus admission to your choice of other top attractions.

Things to Do in Boston in Summer 2020 - Attractions, Activities & More 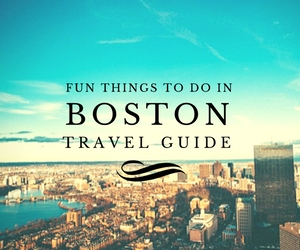