When most visitors think of sports in Miami, they think of surfing, sunbathing, or perhaps even jet-skiing. However, Miami has a long history with its professional sports teams. From the iconic Miami Dolphins NFL team to the soon-to-be playing Inter Miami CF soccer team.

Should you be interested in attending a game, it’s important to either buy directly from the venue or through reputable secondary market sources. Try places like Stubhub or Ticketmaster, for example. Fraudulent tickets can be a problem—especially for those unfamiliar with the ticketing marketplace in the United States. If you need to be on a budget, try walk-up tickets the day of. These are often much cheaper than buying in advance, especially if the game hasn’t sold well.

However, if you’re mostly interested in watching the thrilling matchup between Miami Heat and the Boston Celtics, or seeing the Marlins play a leisurely afternoon game, there are many sports bars throughout the city that cater to these interests. Some of the most popular include Batch Gastropub, Duffy’s Sports Grill (a chain with multiple locations), and Black Market Miami.

If you’re an athletic enthusiast looking to enjoy the sportier side of South Beach, you’ll want to review this brief guide to Miami for sports fans. In alphabetical order:

One of the newest additions to Major League Soccer in the United States, Inter Miami will begin its inaugural season in 2020 as the league’s 25th club. Inspired by the city’s Latin roots and strong Hispanic heritage, the club’s full name in Spanish is Club Internacional de Fútbol Miami and they promise to be one of the most exciting teams in the league.

While their roster has yet to be filled out, their future is bright, with plans for a glittering new stadium, a recently hired coach and technical director, and a vision for the future that truly honors the global, innovative spirit of Miami. Stayed tuned next season to see what Inter Miami has in store for all!

Founded more than 50 years ago, the Dolphins have been very successful during that time. This Miami football team is one of the most iconic football teams in pop culture, with international recognition. They’ve won the Super Bowl twice, been champions of the AFC five times and division champions eight times. They’ve also boasted some of the most famous players in NFL history, including Dan Marino.

The Dolphins play in Hard Rock Stadium in Miami Gardens, which is quite a bit west of the downtown area. You’ll need to bring or rent a car to get here. However, the stadium itself has been newly renovated. It now offers a “global art experience” featuring street art, paintings, and more to honor the vibrant city it calls home.

The Miami Heat was an expansion team in the late 1980s. It is now one of the Eastern Conference’s most glamorous NBA teams due to their South Beach locale and celebrity appeal. They are known for the hard-working Dwayne Wade and his one-time partner, Lebron James. The Miami Heat have been NBA Champions three times (in 2006 with Wade carrying the team and back-to-back years in 2012 and 2013 with the Wade-James duo).

American Airlines Arena, where the Heat play, is conveniently located right on the waterfront of Biscayne Bay. You can easily see the stadium from a cruise or stroll by as you’re exploring the Bayfront Marketplace. The venue also hosts several concerts and special events throughout the year, so you might visit to be part of the latest pop star tour, too.

This Major League Baseball team holds the unique distinction of having won the World Series twice without ever winning a division title. They’re a relatively new team, having joined MLB only in 1993 as an expansion side. A number of their former players have made it to the Baseball Hall of Fame, including Mike Piazza, Trevor Hoffman, and Andrew Dawson.

They play in Marlins Park, which is located near the Miami River in Little Havana on the site of the former Orange Bowl. Visitors can tour the park to experience the excitement of a real baseball stadium. There’s not much to do in the immediate area, but there are restaurants and bars within the stadium itself.

Save on Miami Attractions

you may be in sunny Miami to check out a game or two. But you should also consider checking out other Miami attractions like tours, cruises, or museums. If you want to save up to 55% on admission to these and other great things to do in Miami, grab a Go Miami pass today!

Romantic Things to Do in Miami - Valentine's Day 2020 & More 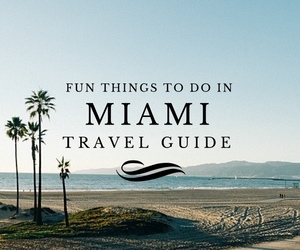 Want to save up to 55% on Miami's top attractions?

Want to save up to 55%
on Miami's top attractions?