January is London’s quietest month when it comes to visitor numbers, meaning there are usually some great flight and hotel deals to be had. What many people don’t realize is that London in January remains a hive of activity. Not only is it still possible to experience the Christmas festivities, but also to grab a bargain in the January sales and celebrate Spring Festival with the capital’s Chinese community.

Weather in London in January 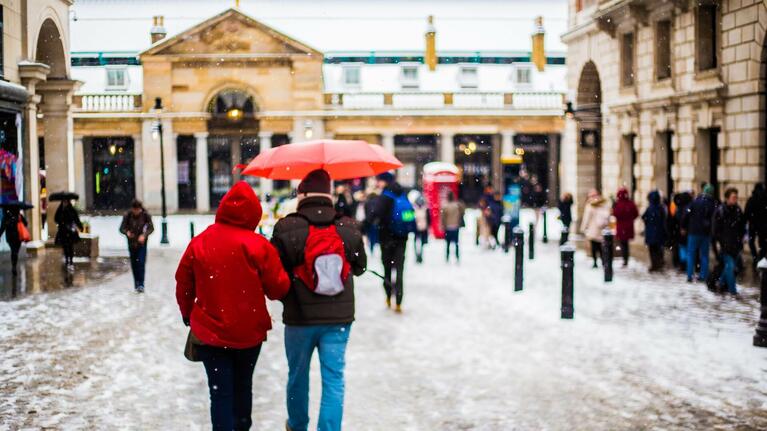 London in January is typified by short days and cloudy skies. Whilst milder than most other capitals in northern Europe, temperatures struggle to hit double figures, with top daytime temperatures reaching eight or nine degrees Celsius.

Rain can be expected at almost any time, although significant rainfall is limited to about a third of the month. Snow in the heart of the capital is rare, and deep snow falls even rarer. If weather forecasts hint at the possibility of a sprinkling of snow, the best places to enjoy the spectacle are attractions on the city’s outskirts such as Richmond Park or the Royal Botanic Gardens, Kew.

When it comes to staying warm, be sure to pack plenty of layers, a trustworthy pair of waterproof boots and some thick socks. Then you’ll be ready for anything the unruly British weather might throw at you whilst exploring all that London vaunts, from New Year partying to renowned museums. 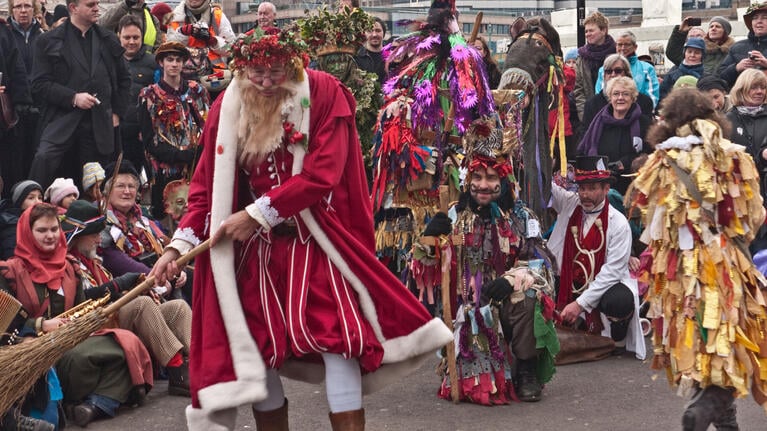 London’s New Year’s Eve celebrations are beamed live across the globe. Even so, there’s nothing quite like being there in person. The countdown begins long before the midnight fireworks light up the skies above the London Eye, with restaurants booking up way in advance.

The fireworks are followed by a New Year's Day Parade. One of London’s newest traditions – having first taken place in the late 1980s – the spectacle starts at noon in upmarket Piccadilly before passing through Trafalgar Square on route to the Houses of Parliament. The 10,000 participants form an eclectic mix of dancers, musicians and performers from every continent, alongside the homegrown delights of London’s Pearly Kings and Queens.

But that’s certainly not the end of the seasonal festivities. Christmas in London doesn’t conclude until Twelfth Night (Epiphany) on January 6. Only then are the Christmas lights switched off, window displays removed, and Christmas trees taken down.

The day is marked on the banks of the Thames at Shakespeare’s Globe by the appearance of the Holly Man. A character from pre-Christian folklore akin to the Green Giant, he symbolizes new life and is welcomed by suitably-clad dignitaries before wassailing (blessing) the river and the city. 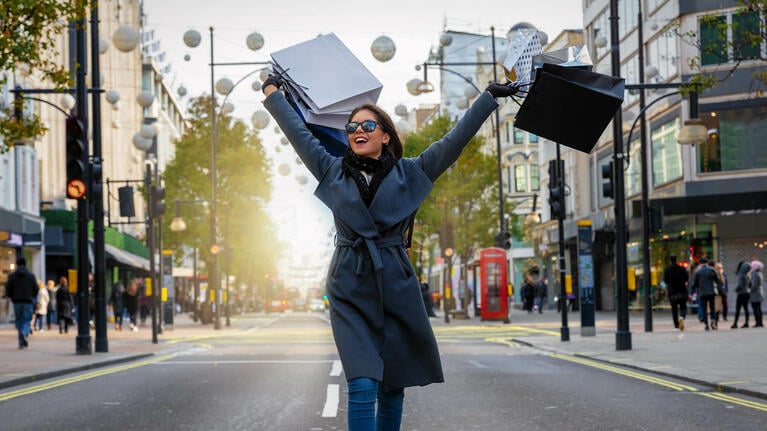 As shopping destinations go, London in January has got to be up there with the best of them. By the start of the month the biggest sales of the year are already in full swing. Few stores want to miss out on the action, with Harrods and Selfridges among the well-known names slashing prices. Although the crowds tend to form at the start of this period, many of the best discounts are to be had when the sales are wrapping up in the middle of the month.

They are swiftly followed by more shopping opportunities at the London Art Fair. Collating works from over 100 of London’s independent galleries, the fair has become one of the best places to scrutinize the capital’s up-and-coming artistic talent in close quarters. And whilst all the works of painting, sculpture and photography are for sale, browsers are also very welcome. 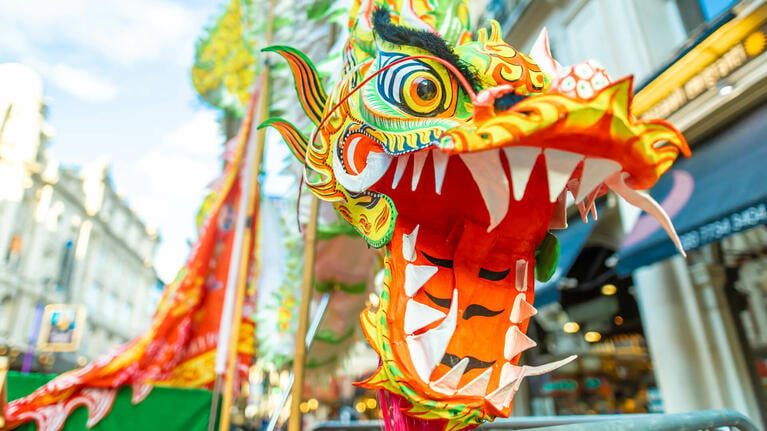 Not content with one lot of New Year’s celebrations, the end of January (or start of February) sees another moment of feasting, this time for Chinese New Year or Spring Festival. Shifting on an annual basis with the new moon, the largest commemorations outside of Asia begin with a street parade in Chinatown containing a series of finely-decorated floats.

Firecrackers then echo across Trafalgar Square to launch a day-long festival of lion dances, musical performances and a plentiful supply of authentic street food. It’s a Spring Festival tradition to mark the new year from high-up, with The View from The Shard and ArcelorMittal Orbit the perfect way to do this.

January’s other big event is Burns Night on January 25. Scotland’s unofficial national day, restaurants across the capital join in with honoring the poetry of Robert Burns, author of Auld Lang Syne. Expect Scottish salmon to make an appearance, alongside haggis, neeps (turnips) and tatties (potatoes) rounded off with a portion of whisky-dosed cranachan. Or you could forgo this raspberry and cream concoction and jump straight to a whisky tasting at one of London’s cocktail bars.

Tick off a museum or two 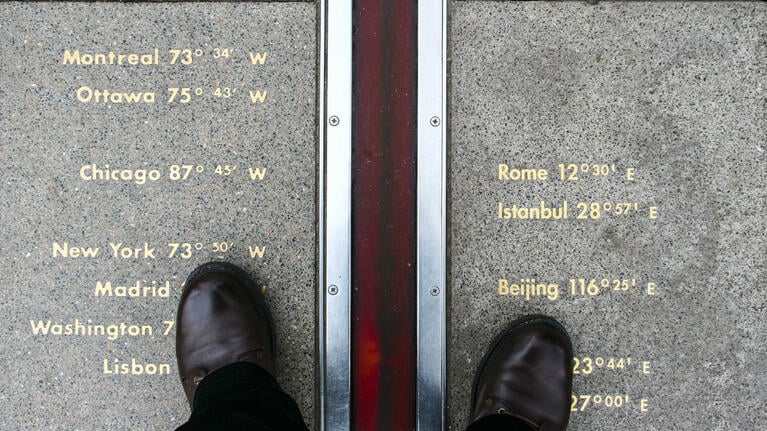 January’s rainier days are just the excuse you’ve been looking for to jump headlong into London’s museums and galleries. Whatever your interests, you can pretty much guarantee there’s a collection somewhere in the capital that suits. For an overview of two million years of humanity look no further than the British Museum, whose riches include the Rosetta Stone and the Anglo-Saxon treasures of the Sutton Hoo ship burial.

Less celebrated but still worth any amount of time you can dedicate to them are Kensington Palace and the Royal Greenwich Observatory. The palace in Hyde Park was the birthplace of Queen Victoria and is presently the home of Prince William and his young family.

Meanwhile, the Royal Greenwich Observatory has been leading the way in mapping and timekeeping for four centuries. Pierced by the prime meridian, it’s one of the most photogenic places on Earth to have your photo taken with one leg in the eastern hemisphere and the other in the western.

Whilst in the area, take a turn at some of Greenwich’s additional attractions, including the Cutty Sark, the last tea clipper sailing ship to be built before steam power took over. Capable of conducting the journey between Chinese ports and the southeast of England in a record-breaking three months, this elegant masted vessel kept Londoners’ obsession with tea fed for just eight years before swapping to a role in the wool trade.

Don’t miss your chance to save with Go City

There’s plenty to see and do in London in January. Many of the capital’s top attractions welcome Explorer Pass holders, allowing you to save on standard admission costs. So, if you’re considering January in London because of the deals available, don’t forget to add Go City to your list of budget-stretching buys.