With so many things to see and do, planning an itinerary for your New York city break can be a bit of a minefield - especially if you’ve only got a few days to pack in all the must-see attractions. Enter Big Bus. Saving you the hassle of planning out your route for the day and tackling the city’s public transport, Big Bus covers plenty of NYC's major attractions across its carefully planned routes. Handy, right? A classic 1-day tour ticket for Big Bus is included on your Go New York Explorer pass and what’s more, for a limited time, you can now use your classic 1-day tour ticket for two days of Big Bus sightseeing. That’s an extra 24 hours of hop-on, hop-off action at no additional cost. Need some more convincing? Here are our top reasons to explore New York with Big Bus.

5 Reasons to Sightsee with a Big Bus Tour 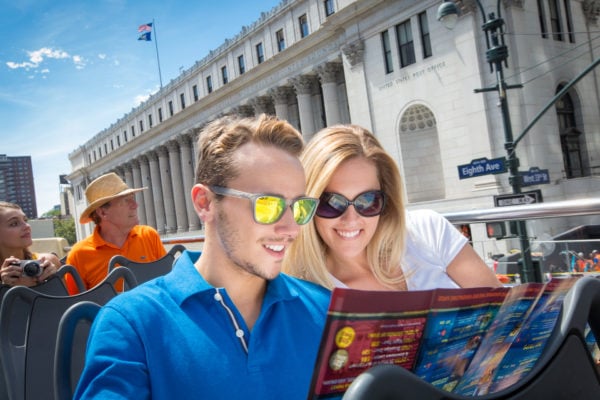 Routes cover all the top attractions

Get ready to start ticking off those top attractions as you can be sure that all they're all on offer on a Big Bus tour. You can take a look at the hop-on hop-off New York map to see all the stops on offer.

You can discover new places

Along with the major headline attractions, the joy of Big Bus is that you can stop off between big-ticket sights and check out some of the city’s lesser-known spots.

It’s easy to get to attractions

Nothing says “I’m a confused tourist” more than standing in the middle of a busy street with a giant folding map. Big Bus makes life a lot easier by taking you right to the tourist sights. Forget navigating public transport or using up your data trying to google directions, just hop on the next Big Bus and you’ll be on your way.

Unlike your average bus tour, the hop-on, hop-off element of a Big Bus tour means you can see as much as you want to. Buses run throughout the day along Big Bus’ tour routes, so jump on and off as often as you wish.

You’ll learn along the way

Every bus has a guide who’ll impart fun and entertaining local knowledge of your chosen city, so you’ll be sure to pick up some interesting historical or cultural tidbits that you might not have discovered on your own. Or if you’d prefer, you can pick the pre-recorded commentary in Spanish, French, German, Italian. Portuguese, Japanese, Mandarin, Korean or Russian. 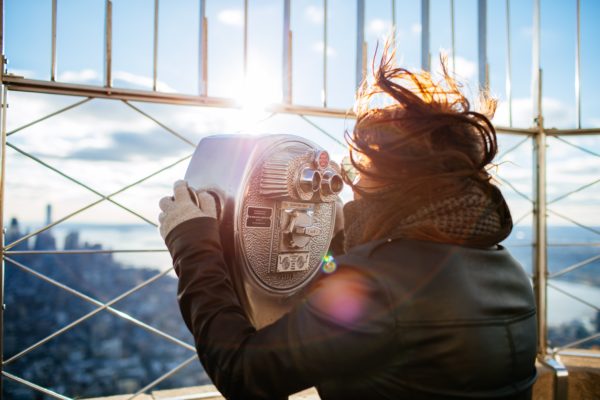 Undoubtedly the world’s most iconic skyscraper, it suffices to say that most first-timers to the Big Apple will have the Empire State Building on their to-do list. We recommend hitting this stop later in the day, when you can zoom up to the 102nd floor to watch the sunset before heading down to Koreatown, home to (unsurprisingly) some of the best Korean Barbeque restaurants in town, and if you’ve got the stamina, some very fun late-night karaoke bars. 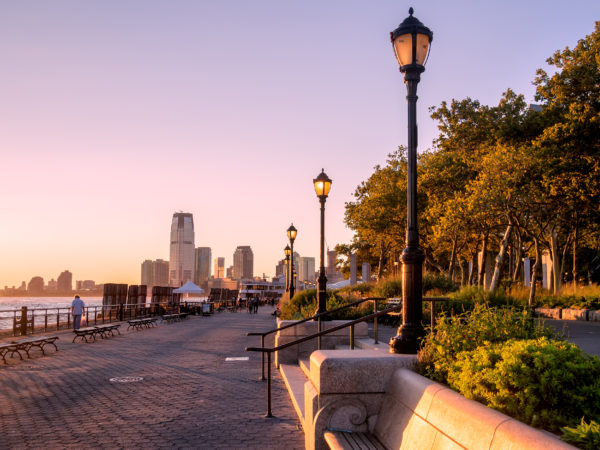 Most will stop off here to catch a ferry to Staten Island to see the world-famous Statue of Liberty, but it’s worth taking a bit of time to meander around the 25-acre Battery Park. Bike paths lined by well-kept gardens and lawns, an urban farm, and a surreal glass carousel are just some of the reasons to stick around, along with the photogenic harbor views, of course. Once you've taken in the sights, you can always head for a ferry tour of the Statue of Liberty and Ellis island, which handily is included on your Go New York Explorer pass. 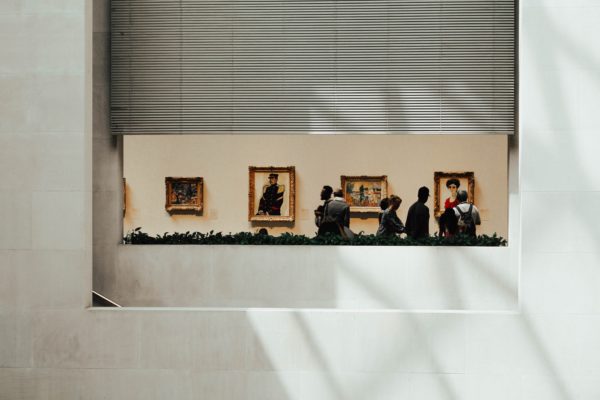 Big Bus drops you right outside The Met, so you can waste no time in getting right into the exhibits. In terms of size, this gallery is mammoth; it’s New York’s largest, taking up 11.5 acres within Central Park and housing some 36,000 pieces of art and objects. Art lovers could easily spend a full day here, but if you’re looking to move on to the next attraction, you can then head straight into the middle of Central Park from the gallery. 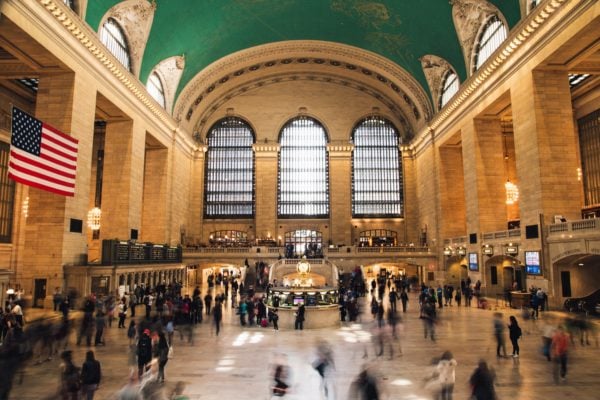 Grand Central’s elaborate golden interiors, lit by Beaux-Arts chandeliers, make this busy station worth a visit. You can escape the crowds by heading to The Campbell bar for a swanky cocktail before heading out to explore. Nearby you’ll find the Chrysler Building, famed for its Art Deco exterior and you’re also a short stroll from 5th Avenue, where you can window shop ‘til your heart’s content. 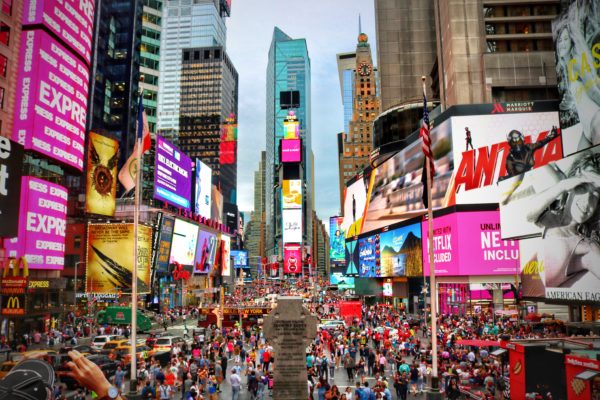 Nothing will make you feel more like you’re on a film set than by paying a visit to Times Square. Once you’ve snapped a million pictures, head into theaterland and grab last-minute tickets to a Broadway show. 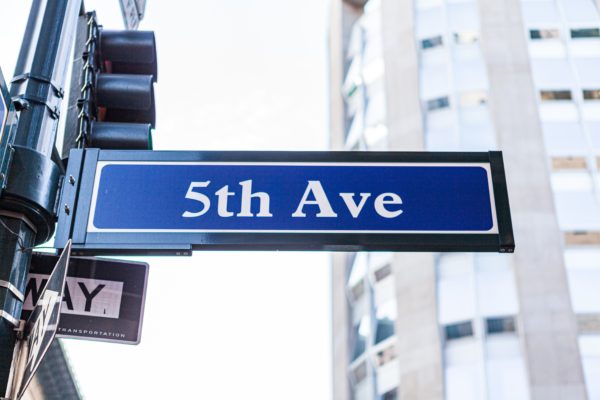 Jump off at Madame Tussauds and go see the famous wax museum. Once you’re done snapping selfies with film stars, signers and world leaders, head to the nearby Rockefeller Center. Your Go New York Explorer Pass includes both entry to Madame Tussauds and to the Top of the Rock Observatory, which offers some of the best views of the city. For more information on stops and routes, take a look at the hop-on hop-off New York map online.

If you’re planning a trip to New York and are hoping to see some of these world-class attractions, then be sure to pick up a Go New York pass. As a Go New York Explorer pass customer, you can use your classic 1-day tour ticket for two days. That’s an extra 24 hours of hop-on, hop-off sightseeing at no additional cost! Offer valid until June 30.
Share this post
Copy Email Share Tweet
Previous post