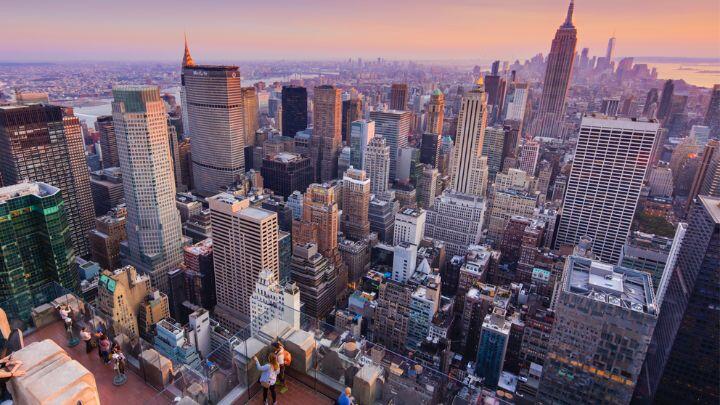 The city that never sleeps? You bet! Day or night there’s always something going on in New York City. But for a whole new perspective - or when you tire of the crowded sidewalks - one of the best ways to take in all that action is from above. You’ll be dizzy with delight gazing down on the blocks and the buildings, the scurrying people and the yellow taxis. But which is the best observation deck in New York? Each of the New York sky decks offers a different view and a different experience from a different height. Here’s the low down (sorry, had to be done) on five (or so) of the city’s high spots… 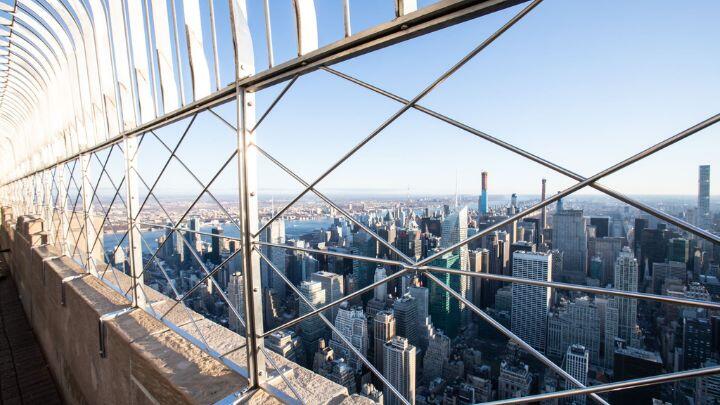 Time to get yourself in an Empire state of mind…at New York’s most Instagrammed landmark! 443.2 meters tall and built during the Great Depression as a soaring symbol of hope and prosperity, for 40 years the Empire State Building was the tallest building in the world. Even though it's not even in the top 20 these days, it’s still one of the world’s most recognisable landmarks and guarantees you a spectacular 360º view of New York City. You’ll find not one but two observation decks - the outdoor one on the 86th floor and (at an extra cost) the indoor one on the very top (102nd) floor.

Begin your visit in the newly restored Art Deco lobby and check out the interactive museum to learn about the building’s rich history. Maybe even grab a selfie with King Kong?! Then zoom up to the 86th floor and drink in a view so impressive that, on a clear day, you can see 5 states. Telescopes give you an even better view of other looming landmarks including the Chrysler Building, One Vanderbilt and the Rockefeller Center - and further beyond, Central Park, Brooklyn, the East River and the Hudson River. If you download the official Empire State Building multi-media tour you can get details of the view from every vantage point. There are even heaters to keep you cosy whatever the time of year. 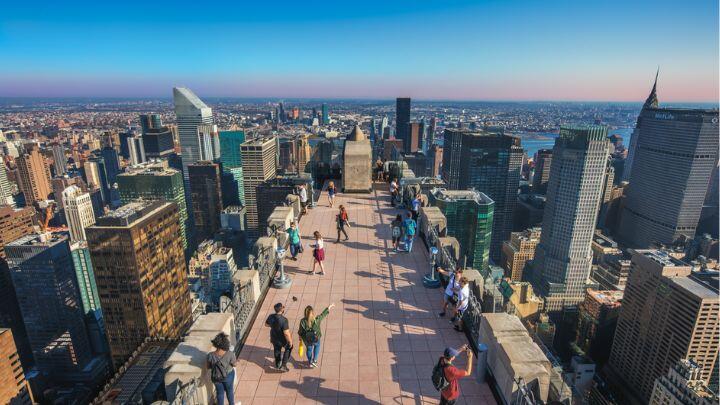 Hold tight as you’re whisked to the 67th floor in just 42 seconds, to an indoor deck with views of the Empire State. Or choose floor 69 for an outdoor deck with glass walls and 270º views. From the 70th floor you have 360º views of Manhattan without having to shoot through glass.

Once you’ve seen some of the best sights in New York from above -  you can see them again from below, since the Rockefeller Center is just a hop and a skip away from Times Square, 5th Avenue, MOMA, Central Park and loads more hot spots. 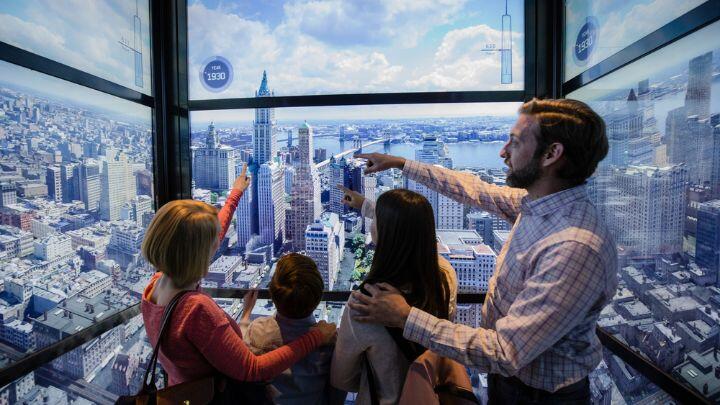 Could the best birds-eye view of New York City be from the One World Observatory, the breath-taking observation deck at One World Trade Center (the tallest building in the Western Hemisphere)?

Be enthralled by its exciting elevator where all four walls are digital screens. There’s more impressive tech as you ascend to the 102nd floor, with a time-lapse transformation of New York from the 17th century to today. Check out another cool video of life in New York in the See Forever Theatre, then cameras at the ready to capture the scene as you gaze through the glass at Manhattan, Brooklyn and the Statue of Liberty spread below. Maybe you’ll even treat yourself to a speciality cocktail - or the full a la carte menu - at ONE dine restaurant and bar? 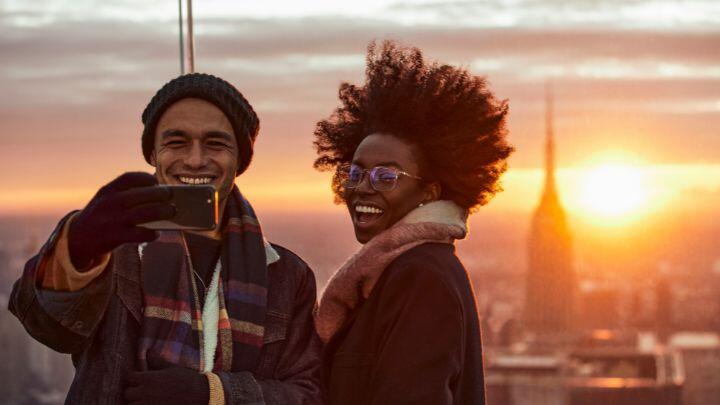 Take it to the top! The Apex is not only the highest observation deck in New York City - but in the whole of the Western hemisphere! Opened in 2020 Edge is a new kid among the observation decks - but super cool since, if you dare, you can grab the very best views of Manhattan through its glass floor.

It’s right in the heart of Hudson Yards, New York’s newest neighbourhood where residents, tourists - and you! - can enjoy over 100 shops, food stops, public art and public gardens. Soar up to the 100th floor to visit the champagne bar, stake out the sky deck or walk upstairs to the 101st floor, for flawless 360º views of New York and New Jersey. 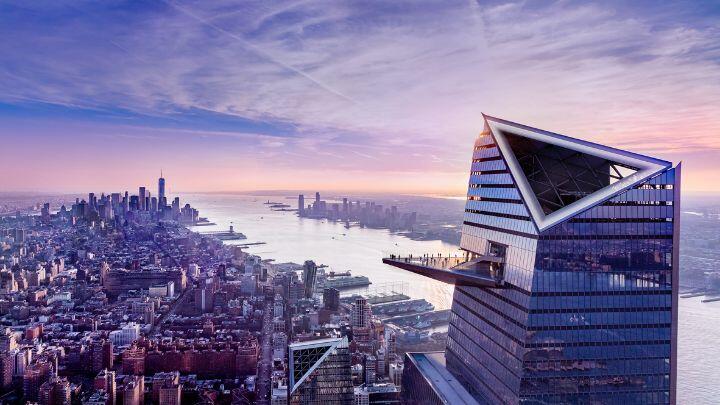 Ratchet up the fun (and fear) factor even more at City Climb NYC, which opened in 2021. Dare you don a harness to scale the outside of the skyscraper to the highest observation deck in New York? Look out from The Cliff (the first outdoor platform) then ascend 161 steps of The Stair to The Apex for truly vertiginous views. No walls, no glass - but a giddying thrill if you’re brave enough to lean out at a height of 1,271 feet!

Whilst we’re in Hudson Yards, can we give a quick honorary mention to The Vessel? Whilst not an observation deck, this bronze honey-comb of stair-cases is certainly worth the climb if you’re looking for a new perspective on the city. Soaring 150ft, it cost an eye-watering $200million and is the centerpiece of this shiny new district where former industrial properties have been transformed into the most expensive real-estate development in US history!

It’s also a great spot to take a stroll on the High Line, around 2km of stunning green walkway following the course of a former elevated railroad. Escape the hustle and bustle of the city streets and see New York from a new angle, whilst enjoying art, sculpture and landscaped planting. When you’ve taken all your pics, don’t forget to drop off at Chelsea Market in the Meatpacking District, renowned as one of the world’s best indoor markets, for foodie treats and quirky independent retailers.

Back to the observation decks - and have we saved the best til last? Another new addition to the skydeck roster, opened in 2021, SUMMIT takes views to a whole new level thanks to a thrilling glass elevator and amazing interactive installations created by artist Kenzo Digital. He describes it as an attempt to express the “intoxicating inspiration of New York City.” As a unique experience, plus the  best view of the Empire State and Chrysler buildings, it’s not to be missed! Oh and did we mention that the photo opps are insane?

Get your senses in a spin on the top three floors of One Vanderbilt, one of Manhattan’s tallest skyscrapers, right next-door to Grand Central Terminal. Start your experience in ‘Transcendence 1’, with floor-to-ceiling windows and reflective surfaces designed to extend the sky so, whether its sunny, rainy or cloudy, you feel like you’re floating in air!
Experience ‘Affinity’ where you’re surrounded by huge silver balloons, look for your face in the clouds of ‘Unity’, then dare yourself to stand and stare down from Levitation, transparent skyboxes hanging over 1,000 feet above Manhattan.
Catch your breath in Aprés bar and lounge, before taking Ascent, the two glass elevators that offer an even more dizzying view of New York. If you choose the ultimate ticket you’ll get a SUMMIT signature cocktail too. They even offer proposal packages for anyone looking for an extra special engagement!

With an All-Inclusive Pass the sky’s the limit. If this round-up has left you feeling on top of the world, remember to always take your adventures to new heights - with Go City.

Things to do Near the Empire State Building