Hop On Hop Off Trolley Tour 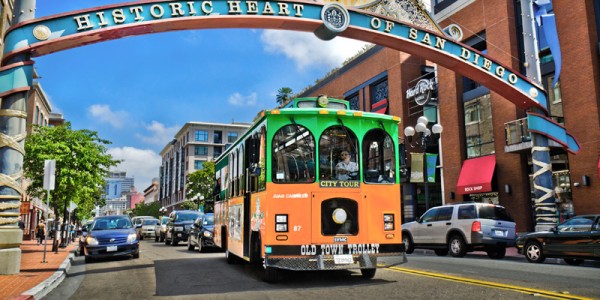 Getting In: Hop On Hop Off San Diego Trolley tickets are included as an option with 3-, 5-, and 7-Day Go San Diego passes. 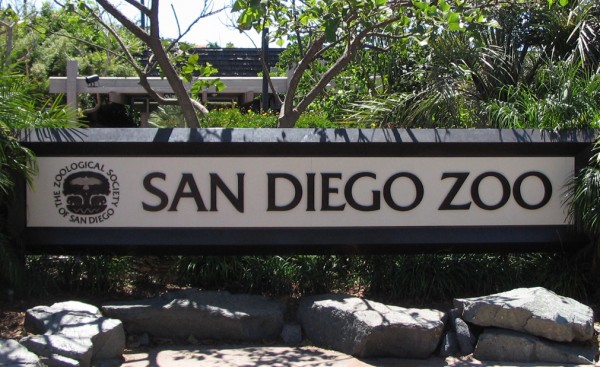 The world-famous San Diego Zoo is home to more than 800 global species, from alligators and eagles to koalas and pandas. It’s also a leader in the conservation of wildlife, and is a must-see attraction for animal lovers. Plan to spend at least half a day here. The warm climate of sunny San Diego provides the perfect opportunity to get out and see the beauty of the animal kingdom in realistic habitats, surrounded by staff who are dedicated to their conservation and well-being. Big animal fans may also wish to visit the San Diego Zoo Safari Park, an exciting animal park that offers unique encounters and experiences with creatures that you might typically find on safari in Africa. If you want help choosing between which to visit, check out our comparison blog. Getting In: San Diego Zoo tickets and San Diego Zoo Safari Park tickets are included with the Go San Diego pass.

By Stephane D'Alu (Own work) [GFDL or CC-BY-SA-3.0], via Wikimedia Commons
Talk a walk through the nation’s largest urban park, Balboa Park is a beautiful place you’ll never tire of exploring. You can ride a bike, hold a picnic, or stop in any of the 17 museums in Balboa Park. Even if you don't explore the museums inside, they're also well known for their spectacular and unique architecture. There are also several performing arts spaces, so try to see if you can attend a special show. Performances vary seasonally. Enjoy extended hours at nine of the Balboa Park museums during Balboa Park After Dark, which begins Memorial Day Weekend and runs through Labor Day. Getting In: Many Balboa Park Museum tickets are included with the Go San Diego pass.

Step Aboard the USS Midway Museum 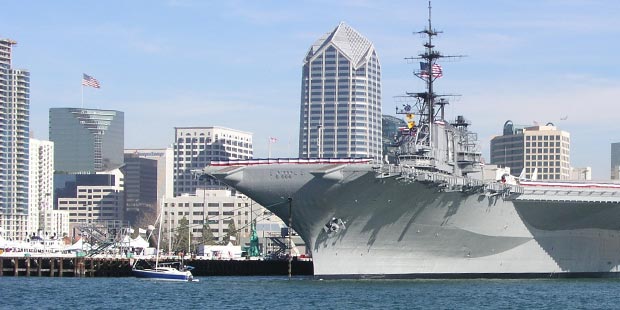 USS Midway Aircraft Carrier Museum
The USS Midway was an operational US Navy Aircraft Carrier for nearly 50 years, and is now an important part of San Diego’s maritime history. The ship has been turned into a floating museum, complete with sleeping quarters, flight control deck, and more. Fans of military technology and American history alike will relish a visit here. Memorial Day is an especially great day to visit the USS Midway and honor veterans. It's also just a great attraction for any curious visitor - it's among the most-visited attractions in the entire city every year. Getting In: USS Midway tickets are included with the Go San Diego pass. 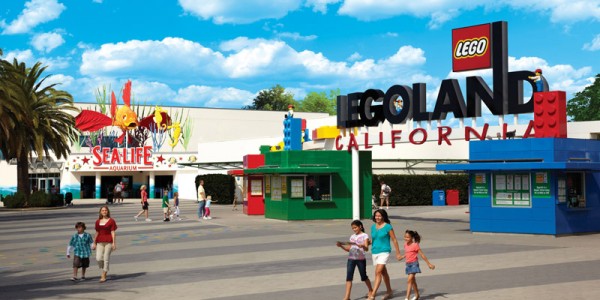 Explore LEGOLAND® California. A one-of-a-kind place, LEGOLAND® is a unique theme park dedicated to the creative potential of LEGO®. Walk through a village made of DUPLO blocks, explore a LEGO® kingdom, and marvel at the African safari populated by LEGO® animals. Be sure to visit the girls at LEGO Heartlake City and make new friends. Or, the Dragon Coaster is an exciting but kid-friendly ride for the little ones to enjoy. You and the kids can definitely spend an entire day – or more – at LEGOLAND®. Getting In: LEGOLAND California tickets are included with the Go San Diego pass.

Go to a Memorial Day Ceremony

Head to the Richard Nixon Library & Museum for it's annual Memorial Day Commemoration on Monday, May 25 at 11:00 AM. Parts of the ceremony include a wreath-laying by Medal of Honor recipient Hershel "Woody" Williams, 21-gun salute, and more. After the ceremony, there will be a book signing by Scott A. Huesing, author of Echo in Ramadi and former USMC Infantry Major. Getting In: Admission to the Memorial Day Commemoration is free. 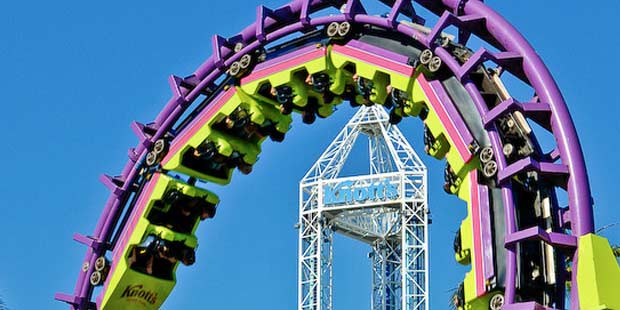 Knott's Berry Farm
Southern California is home to a number of theme parks, and they’re a great way to spend the afternoon or an entire day. It's finally time for the weather to start being really warm, too, so a day spent outside is the perfect way to take advantage of that fine San Diego climate. Two local institutions are Knott’s Berry Farm and Knott’s Soak City. Knott’s Berry Farm was the country’s first theme park, and Soak City is the newer water park; both are sure to thrill the kids. Getting In: Knott's Berry Farm tickets and Knott's Soak City tickets are included with the Go San Diego pass. 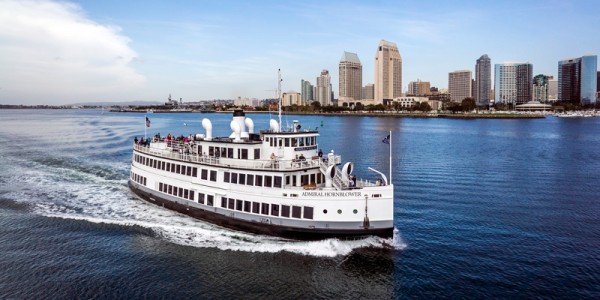 San Diego lies on the shore of some of the most beautiful waters in the world. Explore your aquatic side by embarking on a cruise of the San Diego harbor. You have two options to choose from: the North Bay Tour and Sea Lion Adventure, or the South Bay Tour. The North Bay Tour highlights landmarks like Shelter Island, the Point Loma Lighthouse (where colonies of sea lions often gather), and the Cabrillo Marine Monument. The South Bay Tour features the USS Midway (also fun to visit - see above), Seaport Village, and the Hotel Del Coronado. Getting In: San Diego Harbor Cruise tickets are included with the Go San Diego pass.

Enjoy a Visit to the Fleet Science Center

Your children will delight in a visit to this fascinating science center. Dozens of interactive exhibits await the whole family, like "Power Play San Diego,"  "Kid City," and "Look! Touch! Listen!" If you're looking for an adult-friendly approach to enjoying the Fleet Science Center, consider attending their special event, "Uncorking the Mysteries of Wine." It's a benefit dinner on May 6, 2017, and all profits go to support the educational mission of the Fleet. For more information about this event, visit the event website. Getting In: Fleet Science Center tickets are included with the Go San Diego pass; special events are separately ticketed and are not included with the pass.

Check Out the Birch Aquarium 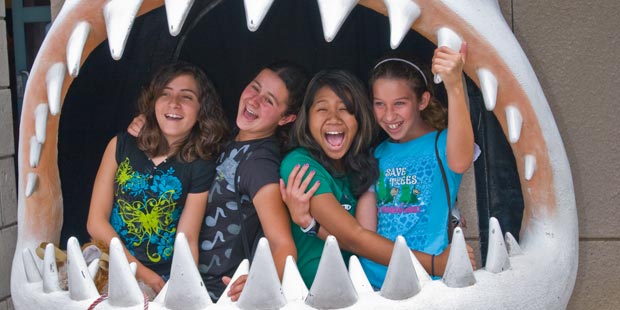 Birch Aquarium
Explore the oceans of the world at the Birch Aquarium. Perched right on the Pacific Ocean, the Birch Aquarium at Scripps displays a stunning collection of marine habitats and creatures from around the world. Learn all about coral reefs, pet some starfish, and visit the seahorse nursery. There’s even a giant shark reef! A few featured exhibits at the Birch Aquarium include: "There's Something About Seahorses," "Whales: Voices in the Sea," and the all-important "Feeling the Heat: The Climate Challenge." Getting In: Birch Aquarium tickets are included with the Go San Diego pass.

Be Active in La Jolla 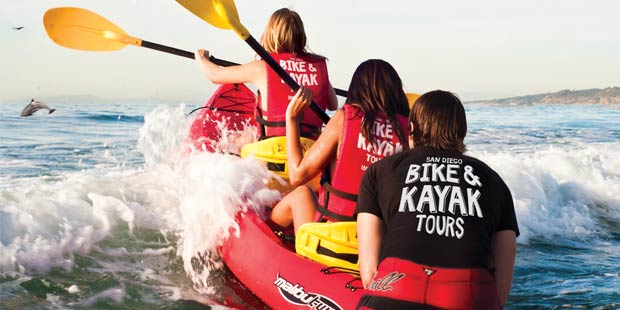 La Jolla Kayak
Check out your outdoorsy options in La Jolla. Enjoy the sun and surf of San Diego’s waterfront, and snorkel La Jolla Cove. Take a bike ride along the shore, or explore Mission Bay. If the day gets too hot, take a dip in the water. You can also rent kayaks and kayak the famous 7 caves of La Jolla! These activities are great for kids and adults and are a fun way to get some exercise and spend the day outdoors. Of course, a stroll along the beach is free for all! Getting In: San Diego/La Jolla Bike and Kayak rentals are included with the Go San Diego pass.

Celebrate at a Local Festival

There's nothing quite like a good old street festival to get you in the mood for summer. Food trucks, beer, games, live entertainment --  it's basically summer waiting to happen. A few great local options this Memorial Day Weekend include the Santee Street Fair & Craft Beer Festival (on May 23, 2020) and the Vista Strawberry Festival (on May 24, 2020). The Strawberry Festival is especially popular with kids, and it's free! The Santee Street Fair requires a modest fee for food and beverage but it's well worth it. Getting In: Admission to the Santee Street Fair & Craft Beer Festival is not included with the Go San Diego pass.

Remember to Save on Attractions & Activities

There you go - plenty of fun ideas for things to do in San Diego in May to help you plan your Memorial Day weekend itinerary. With so many things to do in San Diego, you’ll probably end up having to choose between several excellent options. Remember, many of these great ideas are included on the Go San Diego pass, where you can save up to 55% on combined admission vs paying at the gate. We really hope you consider adding a few of these popular options to your upcoming plans. Enjoy!